In spite of growing violence committed by Islamic militants on Nigerian Christians in the Middle Belt and North, Plateau State has been enjoying some relative peace. However, it has not been immune to lesser-known forms of attacks—abductions.

Patience Vou Jonathan, an eighteen year-old Berom native in Riyom local government area of Plateau State was the target of a common tactic where kidnappers pose as taxi operators and abduct passengers. While narrating her experience to TMV, Patience recounted that on Sunday, 12th February, 2012 at about 2pm, she stood by the road at the Building Material market in Jos South local government area. She boarded a painted taxi on her way to the Church at COCIN RCC Jiye. There were two male and one female passenger in the car. Unfortunately for her, the journey that would have lasted not more 10 minutes took the whole day.

“Immediately I boarded the cab, I became oblivious of time and my environment as though under a spell. When I finally alighted from the cab and was ordered by my captors towards a duplex ahead of me, I noticed everywhere was pitch dark; it was nightfall”.

As patience obediently walked into the duplex, she heard the screams of women, children, and some elderly who had their heads clean shaved. As she walked past the wailing victims into another adjoining room, she saw weird looking faces of men chopping into pieces what appeared to be human beings. Suddenly acting from an impulse she blindly ran out of the building and hid in a nearby bush.

Wielding torchlights to find her, Patience’s captors found and dragged her back into the building where she was brought before a giant grotesque man. After staring at her intently, he shook his head and told her captors in Hausa that he doesn’t need such people. They then took her somewhere outside the building, dispossessed her of her phone and left her to her fate. After hours of wandering aimlessly in the bush she came across a good samaritan who brought her back to Jos.

Father of the victim, Mr. Jonathan Tinja Zam, a civil servant with the State Fire Service Department reported to the police at the Biye out station when he discovered his daughter had not returned home. He was advised to report to the Divisional police ‘B’ headquarters at Anglo Jos, which he promptly did. 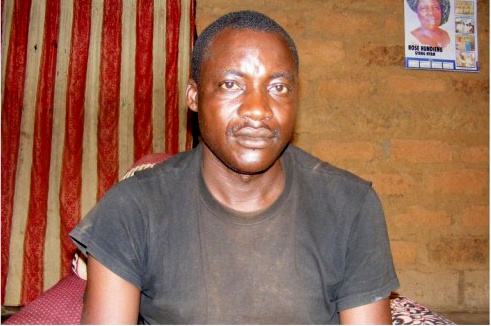 “I got to the Divisional Police ‘B’ Headquarters at about 11 a.m. of Monday 13th February, 2012 and the officers on duty told me that until it had been 24 hours since my daughter was missing, they could not take action— so I had to wait at the station until 2 p.m. before they took my statement and promised they would send radio messages all round police stations in the state”.

Few hours later after he had left the station, Mr. Jonathan, who had tried to call his daughter’s phone, received a call from the Good Samaritan that helped her, instructing him to pick her up at the Plateau Riders Motor Park.
He went there and found her, but the Good Samaritan had left. With this near death experience, Mr. Jonathan is calling on the government to intensify efforts towards looking into nefarious activities like these.

Patience may have been lucky to escape alive without being physically harmed, but many victims, mostly Christian ladies, are never found. For the few that make it home, the story doesn’t typically end well either. One example is an incident that occurred early last year. Two indigenous female students of the University of Jos, whose names are withheld, were forcefully taken to Angwan Rogo, a predominantly Muslim settlement in Jos North local government area. They were abducted after the taxi they boarded swiftly changed course, taking them to a compound they could not identify. Unfortunately for the girls, they were subjected to dehumanizing sexual abuse as several young boys repeatedly raped them. After two weeks of adduction the girls were released, but one of them later died and the other tested positive for HIV.

These types of injustices are frequently visited upon Christians by jihadist in the Middle Belt and Northern Nigeria. Unfortunately, the government has a nonchalant attitude towards this type of ugly crime.