FACES OF THE AUG 15 HEIPANG BUTCHERY

As already reported, eight members of a family, including women and children were brutally murdered in what appears to have been a premeditated attack in Heipang, Plateau State. The incident, which occurred around 12 a.m. on Monday, August 15th at the old railway quarters, threw the residents of the community into a state of disarray. 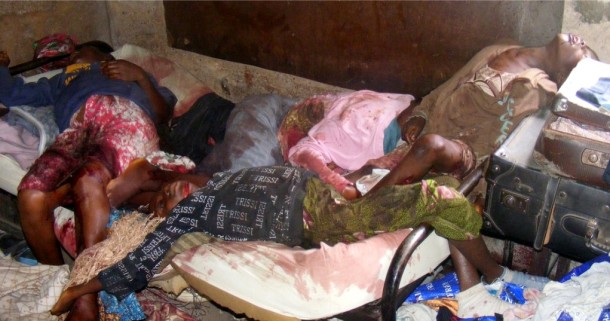 Images of Family Hacked to Death

Victims of the rampage were the family of Mr. John Agboh, a security guard with a local church. While he was away at work on night duty, the attackers arrived at his house dressed in military uniforms and began shooting sporadically. Forcing entry into his room, they shot and killed his wife and, using what appeared to have been bayonets, stabbed and slaughtered his three children. Upon hearing the news, Mr. Agboh collapsed and was later taken to a nearby clinic where he remained comatose for part of the day.

An elderly female neighbor of Agboh said she was sleeping when awoken by gunfire and footsteps, followed by screams emanating for John Agboh’s residence. According to her, she opened the door and “suddenly saw [Agboh’s] older son Nnamdi [dash] out of their house. On his heels were two armed soldiers in hot pursuit”, she reports. “Then I quietly eased myself out of my room and ran into the maize farm adjacent our house and lay down quietly,” she added. From there, the neighbor accounts that she heard Nnamdi scream again. Another gunshot followed close behind, then silence. 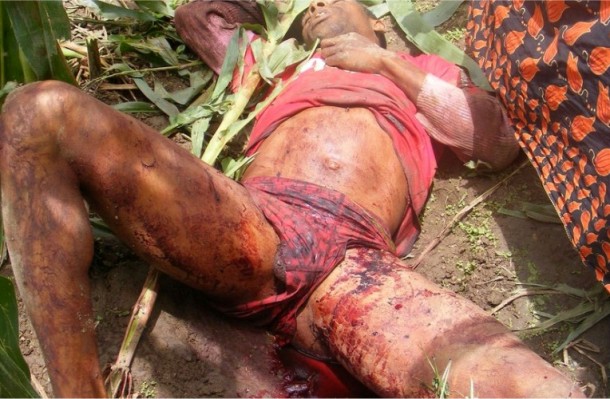 Nnamdi John Agboh With His Genitals Cut Off

The Messenger Voice (TMV) verified her account as Nnamdi’s body was found mutilated in the cornfield. The assailants also went away with his genitals, which they had cut off.

Another eyewitness, Mr. Joseph Dalyop who resides about 50 meters away from the Agbohs said that he quickly alerted his family and left their rooms to hide in the nearby cornfield after hearing the gunshots that night. “Barely thirty minutes later, I saw the patrol pickup van of the Joint Task Force approaching and they stopped in front of my house.” Daylop said, “Three of the soldiers disembarked and went into our house. They went from room to room shouting to inquire if anybody was home.” Dalyop and his family managed to remain calm in the farm until the soldiers left.

Plateau State Government condemned the attack and ordered the security forces to investigate and bring the perpetrators to justice. TMV made efforts to speak to the Divisional Police Officer in charge of Barkin Ladi local government area concerning the attack but was told that he had gone to brief the Commissioner of Police. The unit commander of the JTF posted to Heipang was also unavailable for comment.

This Boy Was Choked to Death

While riding to Heipang to cover the incident that morning, it was apparent that the soldiers had deserted their posts. As a result, irate youths had taken over the major road, burning tires and cutting off the flow of traffic. Stranded travelers lined the roadsides from Maraba Jama’a. Frustrations were writ large on their faces as some folded their arms across their bosom and discussed the ugly situation.

TMV was the first news team on site after the attack. To get to the site, TMV had to travel through Foren Junction where a rabble of angry youth wielding sticks stopped and searched the few vehicles that journeyed in that direction. They accosted and forced TMV to put leaves on the travelling vehicle, a measure of solidarity with their plight. After approaching the railway crossing in Heipang, a second group of angry youth required again for TMV to identify ourselves.

Once allowed to proceed, a drunken angry youth assaulted us and said, “You [journalists] always come and cover stories of any attack of such nature, yet nothing has been done to help our situation. You end up enriching yourselves out of our predicaments,” he said, seething like a cobra. A TMV camera was damaged in the process. This attracted a handful of his peers to walk up and, after understanding the situation, scold the young man, subsequently allowing passage as one of the youth assisted TMV.

Captain Charles Ekeocha of the JTF has already denied involvement of officers and men of the Special Task Force, as it was previously heard on the state owned media. Captain Ekeocha explained that troops were called in to stop the attack when a vigilante opened fire on them, causing the JTF to withdrawal to Maraba Jama’a. When TMV conducted a phone interview wit Gyang Samuel, a Heipang native, he emphatically maintained that no confrontation broke out between vigilantes and JTF soldiers. “Members of our vigilante only carry bamboo sticks and sometimes machetes whenever they keep vigil,” Samuel claimed, “How can they effectively confront soldiers armed with sophisticated weapons? It is pure lie.”

In a Wereh Village of Riyom local government, four persons, mostly women and children were killed in a similar incident that occurred last year. An Identity Card belonging to a JTF soldier was found at the scene of that crime, but General Umar, the task force commander defended the JTF. He asserted that the identified soldier had once been involved in a civilian brawl, which resulted in the loss of his ID. This implied that the ID was planted at the scene to link the JTF to the assailants.