Nearly seventy-five percent of the earth is composed of water. In the human system, that number rises to eighty percent. This figures demonstrate what an essential role water plays in the natural world and within our own physical bodies. Successive Nigerian governments have made promises to provide water to the people.

To see how Plateau State is tackling its water needs, we visited its citizens and asked the following question: Can water be said to be constant in the city?

Mrs. Grace Aina was one of the first people we presented the question to. Here’s how she answered it while declining to speak to the camera, shaking her head vigorously as she lamented that “It’s been years since Water Board supplied us water”. She was quick to add that it was the scarcity of water that has brought hardship to the people of her community that prompted her husband to sink borehole thereby vending water to the people. A 25 liter container of water sold at the rate of 25 to 30 naira.

“We are supplied water only once in two months. And if that is what you mean by the word ‘constant’, well you are entitled to your words” John Ishaya, a pharmacist with the University of Jos health services who resides within the Senior Staff quarters told TMV.

“Well, Water Board is trying but they should try harder”, replied Dung Chollom, a resident of Yantrailler.

As a result of speaking with the people, TMV gathered that even if water was supplied to them, it was not constant. 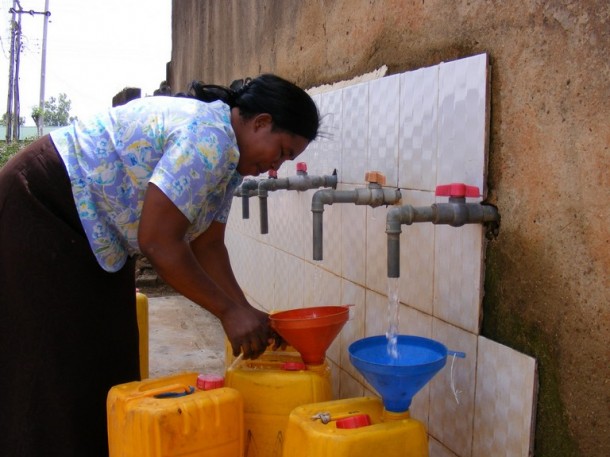 Considering the current climate surrounding state workers in Plateau, it is also appropriate to ask: Could the lack of constant water supply could as a result of the state government workers’ strike?

“It is not the strike”, Mrs. Esther Audu, a seamstress in Tudun Wada declared. “Even before the workers went on strike, water supply was not constant. We always hear Water Board on the radio complaining about this and that as reasons for their failure yet they have not done anything to salvage our situation”, Mrs. Audu inferred.

“How can you say it’s the strike?” retorted Luka Musa a civil servant resident in Hwolshe. Lamenting further Musa said that “we often get relief during the rainy season because some wells and streams get filled up, but now that the rain is fast receding, acute suffering as a result of water scarcity is staring at us in the face.”

And in a bid to get response from the State Water Board, TMV called on the office of Idi Waziri, the Commissioner for Water Resources who is returning to the same office for a second time. However, the lingering imbroglio between the state government and its workers, which has prodded the latter to down tools, made TMV’s visit fruitless as all offices were under lock and key. Attempts to reach him on the phone also proved futile.

As TMV rode further through the city metropolis, we noticed most of the water pipes looked dry, rusted and abandoned as a result of inconsistent usage. While some of the age long pipelines have outlived their usage, others were noticeably passed through gutters and other unhygienic environments.

Major sources of water spread across the city were hand dug wells, streams and few manually operated boreholes. The wells and boreholes were constructed as a result of communal or individual efforts.

TMV also noticed that the business of water vending is steadily receiving a boom now that the rainy season is fast ebbing out and due to the shortage of water, a necessity to people and their environment.