THE FULL STORY OF ST. FINBARRS BOMBING IN RAYFIELD, JOS

After careful investigations of the bombing which took place at the premises of St. Finbarrs Catholic Church Rayfield, Jos on March 11 2012, The Messenger Voice (TMV) is finally able to provide detailed report about the tragic event.

The explosion occurred at about 10:30 am when worshipers were observing the third mass, said an eyewitness who spoke with the TMV. According to the eyewitness, three people, who appeared to be dressed in female attire, approached the main entrance of the church in a Nissan car. When they were accosted by a Police officer and a team of Boys Scouts posted at the gate, an loud argument erupted. In the heat of the altercation, the Nissan car exploded, instantly killing all the parties.

After the explosion settled, six dead bodies immediately laid dead, according to another worshiper who witnessed the event. Meanwhile several persons were severely injured, but no specific number was provided by the eyewitness. The Plateau State Commissioner of Police, Dipo Ayeni reported that 10 people were killed and 27 others were wounded. Nevertheless 18 corpses, related to the bomb blast, were delivered to two separate hospitals; 7 at Plateau Specialist Hospital and 11 at the Jos University Teaching Hospital.  This makes it a total of 18 dead bodies, about double what the police chief claimed.

The loud explosion destroyed part of St. Finbarrs and some surrounding buildings, sending irate youths to the street of Rayfield, Jos. In a bid to quell the upheaval, soldiers shot two of the youths, making them openly chant their displeasure with the force. We prefer mobile police, cried the youth ferociously.

Plateau natives generally prefer the Nigerian Mobile Police Force because the army is disproportionally staffed by Hausa Muslims. Information sourced by TMV, though not officially confirmed, indicates that there are seven Hausa Muslim officers for every three Christians or agnostic deployed in Plateau State. Plateau natives believe this disproportionate ratio favoring Hausas accounts for soldiers senselessly killing non Muslims. This belief has radicalized the Plateau populous, making their youth now apt to mutilate terrorists whenever they are killed or captured. An example of this can be witnessed in the image below which shows youths burning corpses of the terrorist that were killed in the Finbarrs bomb blast. 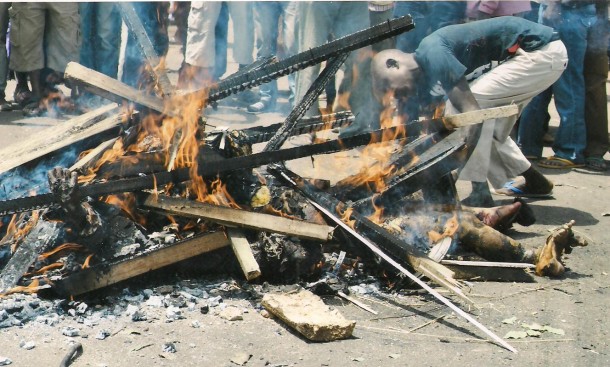 Meanwhile the Secretary to the State Government, Prof. Shedrach Best and the State Chairman of Christian Association of Nigeria, Rev. Philip Dafes condemned the attack. The Plateau Police Commissioner said that security agents are making concerted efforts to bring the perpetrators of the bombing to justice, but no arrest have been made.

Plateau natives have greeted the commissioner’s comments with skepticism, believing there is no disconnection between this wave of attacks and the new tenure of Major General M.D. Ibrahim, a Hausa Muslim. Since Ibrahim became the new Special Task Force Commander over 3 weeks ago, two signifiant attacks have been visited on Churches. One of the attacks was clearly assisted by an army officer, making many blame Ibrahim and his forces for the series of attacks.

A day after the St. Finbarrs bomb blast, Monday 12th of March, 2012, Hausa youths attacked and killed two Christians who drove into their neighborhood about 9:30 in the morning. TMV gathered that the incident occurred at Fillin Ball when a commercial bus driver and his conductor drove through the Hausa settlement scouting for passengers. A group of Muslim youth, who likely identified them as Christians, flanked the bus, pretending to be passengers. When it stopped to pick them up, the men attacked the conductor, hacking him to deaths with knives which were concealed beneath their clothing.

The conductor’s scream prodded the driver to promptly drive away, but not before he had himself sustained a life threatening injury. The driver made it to his neighborhood drenched in blood. He thereafter died, another casualty of the ongoing jihad which Hausa Muslims launched against the Jos Plateau on September 7th 2001–four days before America’s Nine Eleven.

Needless to say, the youth in the driver’s community immediately mobilized and headed for Fillin Ball to avenge the attack. Their actions created an upheaval which spread to Angwan Rukuba Junction, prompting intervention from Nigerian security personnel.