The Plateau State Commissioner for Environment, Mrs. Sarah Yusuf, welcomed 400 Christian who were seeking refuge in Jos after fleeing systematic killings by Hausa jihadists in Yobe State of Nigeria.

While presenting over 8 million naira worth of relief supplies to them, Mrs. Yusuf lamented about the hardships they had endured. According to her, “I wished the displaced people were in the comfort of their homes–which is better than giving them these items.” Mrs. Sarah Yusuf then announced that the state government is using the former Tati Hotel at Gada Biyu as a temporary venue to house refugees.

Meanwhile she stressed the need for all Nigerians to appreciate and tolerate one another irrespective of religion as she handed the relief. Receiving the supplies on behalf of the victims, the President of the Church of Christ In Nations (COCIN), Rev. Soja Bewarang appreciated the kind gesture from Plateau State, thanking the governor for demonstrating a “practical Christian love”. Also expressing thanks was a representative of the refuges, Dr. Adamu Sule who quoted a biblical passage that spoke about Christians fleeing persecution to seek refuge in neighboring lands. Sule further expressed thanks to the leaderships of COCIN, ECWA (Evangelical Churches of West Africa) and some individuals who provided accommodation. 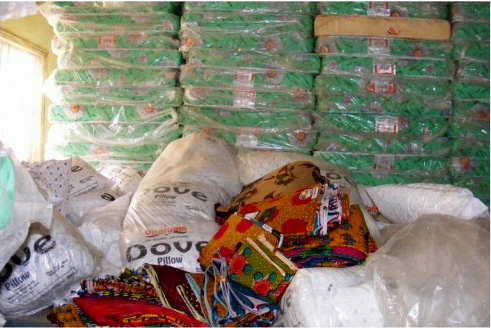 One of the refugees, who wished to remain anonymous, told The Messenger Voice that the situation in Potiskum and Damaturu local government areas was worse, though their experience was also bad. According to him, houses and businesses belonging to Christians were selected and the occupants shot or hacked to death.