ANOTHER HOLIDAY FUEL SCARCITY IN JOS

Recent long queues for fuel in Jos are indicative of yet another gasoline scarcity that hits Plateau State at the onset of holiday seasons. Most of the fuel stations in Jos are closed, with only very few selling. This means that gas retailers are either without the commodity or they are creating an artificial scarcity to force prices up.

It should be mentioned that Mr. Agwu, the Commandant of the Nigerian Security and Civil Defence Corps (NSCDC), had warned owners of fueling stations to desist from hoarding petroleum products and to avoid selling above the stipulated approved prices of 65 naira per liter, or else risk being penalized by the law.

Wishing to remain anonymous, a staff member of Con Oil situated along Murtala Mohammed Way spoke to TMV. According to him: “The problem is not from us, the marketers. We also hardly see the products to buy at this period”.

When TMV asked why the products are difficult to come by during the holiday season, an NNPC Mega Station employee had no response. Meanwhile, a liter of petrol is selling for 85 to 100 naira at the black market. Motorists continued to express displeasure with the fuel shortages since Nigeria exports petroleum to other nations. 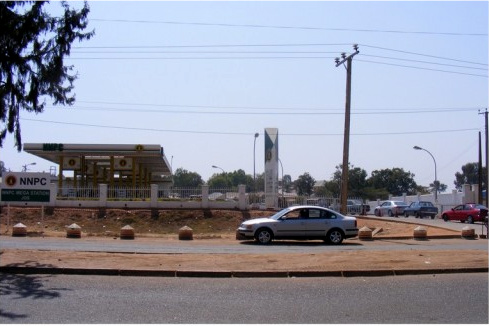 One woman expressed her particular disappointment about the fact that security operatives and government officials brazenly shunt the queue without any regard for others who have been waiting in line for hours. Even at the Nigerian National Petroleum Corporation (NNPC) Mega Station, the motorists’ queues stretch about 1650 meters away from the station.

Along the roads through town, passengers hoping to get a ride stand with frustration writ largely on their faces. Few commercial drivers are on the roads to pick them up due to the fuel shortages.