EVIDENCE OF MILITARY PARTICIPATION IN THE HAUSA JIHAD

As we assume you already know, the Nigerian government was forced to initiate a shakeup in the military due to incessant attacks by Boko Haram. The shakeup brought Major General M.D. Ibrahim to Jos as he is the new commander of the Special Task Force (STF). Meanwhile the former STF commander, Major General Olayinka Oshinowo was reassigned to Enugu State where he is now the new General Officer Commanding the 82nd Division of the Nigerian Army.

Many Plateau natives regard Oshinowo to be a successful commander because, according to them, terrorist attacks dramatically dropped under his tenure. They also claim that Oshinowo stopped collaborations between Hausa officers and their brethren jihadists.

The sudden resumption of attacks after Oshinowo’s departure has given credence to this sentiment especially because the COCIN headquarters bombing involved a Nigerian army officer. The subsequent attack on March the 11th at a Catholic Church in a suburb of Jos–Rayfield also feeds this sentiment because the assailants passed through a military checkpoint unmolested.

These two events impelled The Messenger Voice (TMV) to review a report titled “Faces of the Aug 15 Heipang Butchery.” While editing the report before it was published last year, TMV withheld information involving Military identification cards found at the scene of the crime after seeking advice from a security officer. When the officer was made aware that several military identification cards were found at the scene of the crime, he told TMV that publishing such information would compromise investigations. According to the officer, fringed members of the security forces would facilitate a cover up that would make it difficult to investigate any evidence found at the crime scene, if the information is made public. 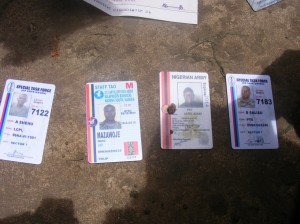 Besides considering the officers reasoning, TMV withheld the information because these questions had not then been resolved: Why were there several IDs left behind? In other words, did everyone of the assailants lose their ID at the same time and if so, what were the probabilities of such an event?

Since then however, our investigations have revealed that the assailants typically hand over their ID cards to one officer for safe keeping before carrying out their attacks. That would therefore make it possible to have several IDs left at a crime scene if the safe keeper gets tangled up in the attack because things did not go as planned.

As there are more and more evidence of military participation in the attacks in The Middle Belt and Northern Nigeria, TMV felt obliged to publish this information. Moreover, reports about officers handing their IDs to another team member for safe keeping is not far fetched. TMV also felt it was important to publish this information because the public believes it is not a coincidence that terrorist attacks have resumed at the departure of Major General Olayinka Oshinowo.

In closing, it is important to note that the identification cards were discovered in Heipang because a TMV reporter beat the Nigerian authorities to the crime scene. The attack had taken place earlier about 12 O’clock midnight on Monday August 15th 2011. Having beaten the Nigerian authorities to the crime scene, TMV gained access into the house and to a cornfield where several family members were butchered. Amidst the corpses of the victims were military IDs along with credit cards and bank drafts which had been apparently left behind by the assailants. Double click on the photographs to enlarge them for detailed viewing. 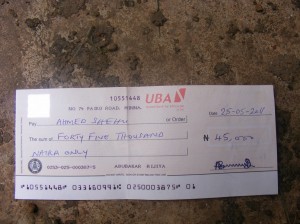 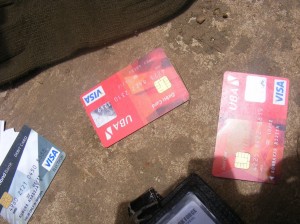 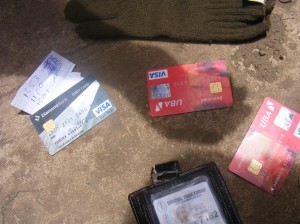 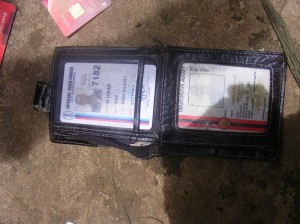