More on the Barkin Ladi Violence

In a follow up to our article, “The Violence in Barkin Ladi”, TMV revisited the town over one week after the violence subsided. While many buildings remain destroyed, day-to-day activity appears normal with people buying and selling at the Barkin Ladi Market.

TMV also noticed that The Divisional Police headquarters was empty, though it was a refugee camp for hundreds a week ago. The internally displaced persons have either gone back to their residence or sought refuge elsewhere if their property had been destroyed.

Samuel Mahoss, a Barkin Ladi resident whose house was destroyed, took TMV to see the charred remains of his property. He called on the government to aid them in rebuilding their burnt houses, as he lamented his losses. According to Mahoss, the death toll in the Angwan Company neighborhood, was 33, including women and children. Mahoss prayed for this to be the last time such an incident would occur. 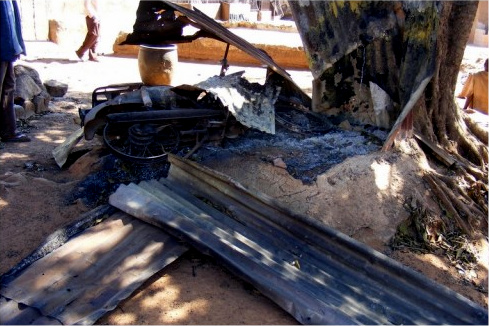 At the Kok neighborhood, a predominantly native area, virtually all houses were burned. Twenty-eight persons, mostly women and children, were killed and an undisclosed number are receiving treatment in various hospitals for injuries ranging from gunshots to machete cuts. The Councilor representing the Ward in the local government secretariat reportedly lost four of his children in the callous attacks.

As the Hausa neighborhoods were inaccessible for security reasons, TMV was unable to confirm the number of natives reportedly killed in that section of town where the riots began. Likewise, many Hausas lost their lives in the native section of town, but we have been unable to gather an account of the number killed.

At the First Baptist ‘Church, soldiers stood watch next to an armored military tank. There remains a large presence of security officers in Barkin Ladi, hoping to prevent another flare up.