As violence continues in Northern Nigeria and the Middle Belt, two bombs exploded in Jos on Sunday September the 11th. The bombs, which were placed about 35 meters apart at a popular social spot in West of Mines, went off alternately.

The first explosion came about 8:30pm, while the second one followed a few seconds later. By the time The Messenger Voice (TMV) got to the scene of the explosions, security agents had already cordoned of the area. In a bid to disperse people from the scene, officers sporadically fired their riffles in the air, further heightening the tension.

The crowed that had gathered at the popular relaxation spot where the bombs exploded quickly vacated. Although there were no fatal casualties, as TMV gathered from inquiries, the incident generated a pandemonium that rippled across various communities in the city metropolis.

Some youths at the Gada Biyu met a stiff response from the Special Task Force (STF) when they came out to protest the bomb blast. One of them was shot in the leg and taken to the Bingham University Teaching Hospital (Jankwano) for treatment.

The explosions came ahead of a proposed peace convention planed for Christian and Moslem youths on Monday, Sept 12, 2011. Still, The Police and the STF have not issued an official comment about the incident and no group one has claimed responsibility for the bomb blasts. 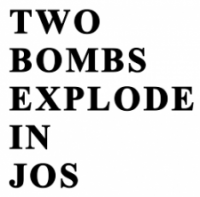